Alongside this are brand new £4m urban solar parks, some of the UK’s largest, which will provide green electricity to run the minewater heating system, as well as  other Council buildings. 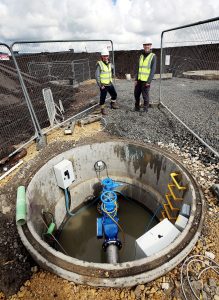 The outlet for the mine water extraction bore hole, drilled down 150 metres into old mine workings. Councillor John McElroy, cabinet member for environment and transport, with Jim Gillon, energy services lead.

Gateshead Council has invested in these projects over the past two years, using the expertise of the Coal Authority and with funding from the Department for Business Energy and Industrial Strategy (BEIS) – both the Heat Networks Investment Project (HNIP), and the Public Sector Decarbonisation Scheme. Gateshead were awarded £9.9 million grant for commercialisation and construction under HNIP.

The Gateshead project is the largest mine water heat scheme of its kind in the UK. Until now mine water has only been used to heat smaller scale buildings or warehouses. The mine water system aims to take the legacy of the first industrial revolution and harness it to build a new green revolution.

Gateshead has operated its own District Energy Network (DEN) since 2018 through its wholly owned Gateshead Energy Company, but until now the water in the network has been heated solely by gas-powered Combined Heat and Power (CHP) engines.

Now mine water will provide up to half the heat required by buildings connected to the network.

The mine water, at 15 degrees C, is taken from drilled boreholes and passed through a heat exchanger which transfers heat, via a heat pump, into a network of underground pipes that supply hot water at 80 degrees C to homes and buildings. Mine water doesn’t actually flow through the network which heats the buildings but is instead returned to the ground once the natural heat is taken.

Councillor Martin Gannon, leader of Gateshead Council, said: “I think what is happening here is amazing, because what we have in Gateshead is a legacy from the days of the coal mines, which was dirty energy. Where we were a leader in the industrial revolution 200 years ago, we are now a leader in the green energy revolution of today.”

Amy Fry, Relationship Manager at Triple Point Heat Networks said: “It’s been a real pleasure to support such a forward-thinking team and see the progress they’ve made since securing HNIP funding in 2019. It’s an exciting time for the North East as they lead the way in the green industrial revolution, their work so far shows their ambition to tackle climate change and reach their zero carbon goal by 2030.” 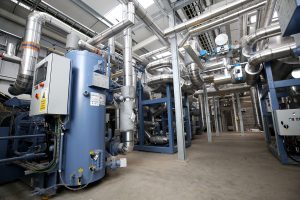 Inside the energy centre

The mine water scheme forms part of Gateshead Council’s Zero Carbon Heat Strategy, which aims to provide low carbon heating for everyone in the borough whilst reducing greenhouse gases in the environment.

The council is also committed to delivering this new heat source affordably – with customers’ bills guaranteed to be at least 5% below the market rate.

The Gateshead District Energy Network (DEN) already has the capacity to supply the energy needs of the equivalent of 5,000 homes, and GEC is currently expanding the network further to reach Gateshead Stadium and a new housing development to be built close to the A184 Felling Bypass.

Owned by the Council and operated by Gateshead Energy Company (GEC) since 2018, the DEN supplies affordable, low carbon heat and power to homes, businesses and public buildings over a 5km private network across Gateshead town centre, including offices such as PROTO and RIGA, cultural venues like Sage Gateshead and BALTIC Centre for Contemporary Art – as well as homes and council offices.

The new arena and conference centre known as The Sage, as well as adjoining hotels, will also be supplied by the network.

Both the Council and GEC have committed to achieving Zero Carbon status by 2030, and GEC is investing to achieve this for its energy supplies.

Gateshead sits on a collection of old mine workings, which have filled with water since the mines closed and pumps switched off. Using 150m boreholes, we can access the water in the mines which stays at a constant 15 degrees Celsius year-round. The project is currently in its testing phase, awaiting final permits from authorities and will soon be switched on for consumers to start benefitting ahead of the autumn.

Alongside the mine water heat scheme, Gateshead Council has invested £4m in installing two solar parks on brownfield land, totalling 4MW of electricity, which will feed into the District Energy Centre network.

The Council and GEC continue to explore and develop further solutions – exploring waste heat and power, hydrogen and deep geothermal – which are expected to bring forward further investment and technology post 2025, to support the shared goal of reducing network emissions to net zero by 2030. 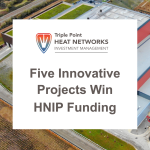 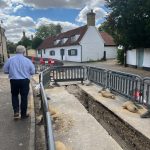