Simon Carman, director of Asteros Advisers, part of Triple Point Heat Networks Investment Management talks to REI about the rising interest in the use of heat pumps in heat networks.

Connecting multiple buildings via a series of insulated pipes to distribute low carbon heat is not a new concept, and neither is the use of heat pumps to provide the heat source. However, the sector is starting to see these two technologies come together on a more regular basis.

Triple Point Heat Networks Investment Management delivers the £320 million Heat Networks Investment Project (HNIP) on behalf of the Government and the scheme, now in its 9th funding round, has proven incredibly popular since its launch. Over the course of these funding rounds, we have observed some interesting changes in the types of schemes applying for gap funding.

A third of successful HNIP schemes are now utilising heat pumps as the primary heating technology, and the latest heat network pipeline report suggests that this trend is likely to continue. The majority of HNIP applications are from schemes utilising either heat pumps or energy from waste plants whilst the older feasibility studies within the pipeline predominantly considered gas CHP.

The UK is starting to see interest in fifth generation heat networks that deliver heat through an ambient loop to individual properties that each have their own ‘shoe-box’ heat pumps.  These systems further enhance efficiency and have the additional advantage of property owners being able to choose their electricity supplier for their own heat pump units.

Heat networks are by their very nature technology agnostic, so it is expected that a range, and sometimes multiple, solutions are deployed in a single network. Successful HNIP applications include heat networks combining ground source heat pumps and air source heat pumps and we are also working with two mine water heat pump projects. These schemes offer substantial carbon emission reduction potential.

This paints a positive picture of the UK’s growing heat networks market and sets the tone for the Government’s proposed Green Heat Networks Fund – a funding programme that intends to support new and existing heat networks with the shift to low and net zero carbon technologies. This shift is notably already taking shape.

Some of the projects to have been awarded HNIP funding for heat networks that integrate heat pump technology have been highlighted below.

This project was awarded funding through HNIP for the expansion of its existing network and the installation of a second low carbon energy centre to supply heat to a number of new commercial developments in the area. The current scheme, which utilises biomass boilers, was completed in 2016 and supplies 700 social housing properties.

The scheme will also include future proofing works to enable the network to be connected to additional existing loads and proposed new developments around Bristol Temple Meads.

In addition to this section of the network the council will also be expanding to new areas of the city which will be served by new renewable sources such as water source heat pumps and geo-thermal technology.

HNIP funding will support the commercialisation and construction of the first major, strategic eastward expansion of the heat network within the Gateshead District Energy Scheme. This will enable the scheme to supply lower cost, lower carbon heat to an additional 12 GWh of heat load by 2030 represented by four Council buildings, a care home and, in time, up to 1250 new private homes within the Exemplar Neighbourhood, Gateshead’s largest new-build housing development site.

The proposed Seaham Garden Village district heat network, if built out, is expected to supply low-carbon geothermal heat from former coal mines to a new development to the south of Seaham. It is forecasted that up to 1,500 homes could connect to the network over time.

Mine water is continuously pumped from the mine and treated to remove contaminants at the Dawdon Mine Water Treatment facility adjacent to the development. The mine water is heated by geothermal processes to circa 20°C providing low-cost low-carbon heat.

For more information about these projects, and to see other schemes who have been awarded funding through HNIP, please visit https://tp-heatnetworks.org/ 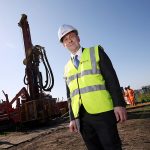